ABSTRACT: The
approaching 4G (fourth generation) mobile communication systems are
projected to solve still-remaining problems of 3G (third generation)
systems and to provide a wide variety of new services, from high-quality
voice to high-definition video to high-data-rate wireless channels. The
term 4G is used broadly to include several types of broadband wireless
access communication systems, not only cellular telephone systems. One
of the terms used to describe 4G is MAGIC—Mobile
multimedia, anytime anywhere, Global mobility support, integrated
wireless solution, and customized personal service. As a promise for the
future, 4G systems, that is, cellular broadband wireless access systems
have been attracting much interest in the mobile communication arena.
The 4G systems not only will support the next generation of mobile
service, but also will support the fixed wireless networks. This paper
presents an overall vision of the 4G features, framework, and
integration of mobile communication. The features of 4G systems might be
summarized with one word—integration. The 4G systems are about
seamlessly integrating terminals, networks, and applications to satisfy
increasing user demands. The continuous expansion of mobile
communication and wireless networks shows evidence of exceptional growth
in the areas of mobile subscriber, wireless network access, mobile
services, and applications.

The evolution from 3G
to 4G will be driven by services that offer better quality (e.g.  video
and sound) thanks to greater bandwidth, more sophistication in the
association of a large quantity of information, and improved
personalization. Convergence with other network (enterprise, fixed)
services will come about through the high session data rate.
Machine-to-machine transmission will involve two basic equipment types:
sensors (which measure arameters) and tags (which are generally
read/write equipment). It is expected that users will require high data
rates, similar to those on fixed networks, for data and streaming
applications. Mobile terminal usage (laptops, Personal digital
assistants, handhelds) is expected to
Figure 1:Service evolution vision

Grow rapidly as they
become more users friendly. Fluid high quality video and network
creactivity are important user requirements. Key infrastructure design
requirements include: fast response, high session rate, high capacity,
low user charges, rapid return on investment for operators, investment
that is in line with the growth in demand, and simple autonomous
terminals. As a comparison, the expected best performance of 3G is
around 10 bit/s/Hz/km2 using High Speed Downlink Packet Access (HSDPA),
Multiple-Input Multiple-Output (MIMO), etc. No current technology is
capable of such performance.
Key 4G Technologies:
Some of the key technologies required for 4G are briefly described below:

Orthogonal Frequency
Division Multiplexing (OFDM) not only provides clear advantages for
physical layer performance, but also a framework for improving layer 2
performance  by proposing an additional degree of free-dom. Using ODFM,
it is possible to exploit the time domain, the space domain, the
frequency domain and even the code domain to optimize radio channel
usage. It ensures very robust transmission in multi-path environments
with reduced receiver complexity. As shown in Figure 5, the signal is
split into orthogonal subcarriers, on each of which the signal is
“narrowband” (a few kHz) and therefore immune to multi-path effects,
provided a guard interval is inserted between each OFDM symbol 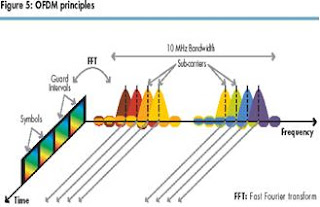 OFDM also provides a
frequency diversity gain, improving the physical layer performance. It
is also compatible with other enhancement technologies, such as smart
antennas and MIMO. OFDM modulation can also be employed as a multiple
access technology (Orthogonal Frequency Division Multiple Access;
OFDMA). In this case, each OFDM symbol can transmit information to/from
several users using a different set of subcarriers (subchannels). This
not only provides additional flexibility for resource allocation
(increasing the capacity), but also enables cross-layer optimization of
radio link usage.
Coverage:
From
1 to 20 bit/s/Hz/km, while Pico cell technology can achieve from 100 to
500 Bit/s/Hz/km?, depending on the complexity of the terminal hardware
and software. These performances only refer to outdoor coverage; not all
the issues associated with indoor coverage have yet been resolved.
However, indoor coverage can be obtained by:Coverage is achieved by
adding new technologies (possibly in overlay mode) and progressively
enhancing density. Take a WiMAX deployment, for example: first the
parent coverage is deployed; it is then made denser by adding
discontinuous Pico cells, after which the Pico cell is made denser but
still discontinuously. Finally the Pico cell coverage is made continuous
either by using MIMO or by deploying another Pico cell Coverage in a
different frequency band (see Figure 9). The ultimate performances of the various technologies are shown in Figure 10. Parent coverage performance may vary
• Direct penetration; this is only possible in low frequency
bands (significantly Below 1 GHz) and requires an excess of power, which
may raise significant Interference issues.
• Indoor short range radio connected to the fixed network.

• Connection via a relay to a Pico cellular access point.

As the history of mobile communications shows, attempts have been made
to reduce a number of technologies to a single global standard.
Projected 4G systems offer this promise of a standard that can be
embraced worldwide through its key concept of integration. Future
wireless networks will need to support diverse IP multimedia
applications to allow sharing of resources among multiple users. There
must be a low complexity of implementation and an efficient means of
negotiation between the end users and the wireless infrastructure. The
fourth generation promises to fulfill the goal of PCC (personal
computing and communication) a vision that affordably provides high data
rates everywhere over a wireless network.

The provision of megabit/s data rates to thousands of radio and mobile
terminals per square kilometer presents several challenges. The key
enablers are: