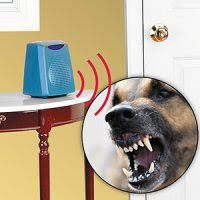 ABSTRACT:   Electronic
watchdog is used for your house that sounds to inform you that somebody
is at gate or passing through it. The circuit comprises of a
transmitter unit and receiver units, which are mounted face to face on
the opposite pillars of the gate or door such that the IR beam
transmitted through IR LED1 of the transmitter, get interrupted when
someone is standing at the gate or passing through it.

CIRCUIT OPERATION
The transmitter circuit shown in below fig.1
is built around timer NE555 (u1), which is wired as an astable
multivibrator producing a frequency of about 38KHz. The infrared (IR)
beam is transmitted through IR LED1. 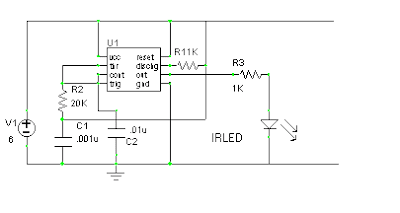 TRANSMITTER:
The receiver circuit is as shown in
fig.2 .It comprises IR sensor TSOP1738 (IR RX1), NPN transistor BC548
(Q1), timer NE555 and some resistors & capacitors. Timer is wired as
a monostable multivibrator with a time period of around 30 seconds. The
melody generator section is built around melody generator IC UM66,
transistor (Q2) and loudspeaker.
The power supply for the transmitter
is derived from the receiver circuit by connecting its points A and B to
the respective points of the receiver circuit. The receiver is powered
by regulated 6V dc. For this purpose you can use a 6V battery.
RECEIVER:
The transmitter and receiver units are
aligned such that the IR beam falls directly on the IR sensor. As long
as the IR beam falls on the sensor, its output remains low, transistor
Q1 does not conduct trigger pin of IC remains high.
When anyone interrupts IR the beam
falling on the sensor, its output goes high to transistor Q1 into
conduction and trigger pin of IC goes low momentarily. As a result, IC
gets triggered its pin3 (output) goes high to supply 3.3V to melody
generator IC at pin2, which produces a sweet melody through the speaker
fitted inside the house. Output pin of 555 IC remains high for around 30
seconds.
APPLICTION:
The transmitter and receiver units are mounted on the both sides of the gate as shown in the figure. 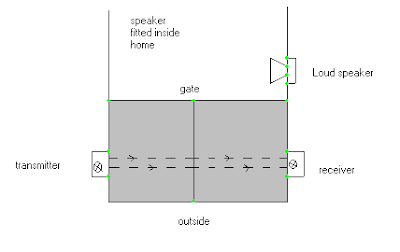 To achieve high directivity of the IR beam towards the
sensor, use a reflector behind IR LED. When somebody enters through the
gate or door the IR beam is interrupted and the alarm sounds for 30
seconds. The alarm keeps sounding as long as the one stands between
transmitter and receiver units.
This circuit can also be used as a doorbell or burglar alarm.